So, the first single appears from the new Nick Cave & the Bad Seeds LP, scheduled for release in February 2013 (and with some beautiful packaging).

This is really interesting.  The track is a ballad but whereas Nick Cave & the Bad Seeds would normally use a band format to record this, this feels very much like a Grinderman production (with vocals from the Boatman’s Call) – the drums are heavily affected, atmospheric noises creep in and out, and, well, it’s very cool.

It is doubly interesting if this represents the direction for the new LP.  Below is the “lyric video”, which, er, shows the lyrics:

Push the Sky Away, Article 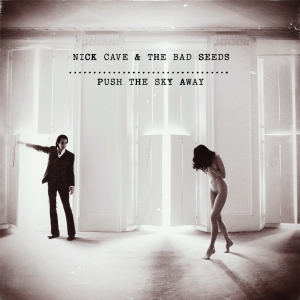 NickCave and the Bad Seeds are getting ready to bow their first album in five years when “Push the Sky Away” drops on Feb. 19. In between, Cave has been busy in Grinderman. In fact, two-thirds of the ensemble for “Sky” have been busy with the same thing.

Multi-instrumentalist Warren Ellis, bassist Martyn Casey and percussionist Jim Sclavunos, in addition to Cave, made up Grinderman in its last incarnation in 2011; Bad Seeds alumni Thomas Wydler (drums) and Conway Savage (vocals) return as well. Mick Harvey is still M.I.A. since he and Cave had a parting of ways after more than two dozen years in 2009.

But its Casey we hear from the most in the trailer for the album. That brrrring drone lays overtop studio jabber from Cave and his cohorts as they lay down their plans at La Fabrique in the south of France.

What the chatter won’t tell you is the basic narrative that may make up most of “Push the Sky Away”:

The songs on this album took form in a modest notebook with shellac covers over the course of almost a year. The notebook is a treasured analogue artefact but the internet is equally important to Nick: Googling curiosities, being entranced by exotic Wikipedia entries “whether they’re true or not”. These songs convey how on the internet profoundly significant events, momentary fads and mystically-tinged absurdities sit side-by-side and question how we might recognise and assign weight to what’s genuinely important.

That does sound important. In a release, Cave said that the album “is the ghost-baby in the incubator and Warren’s loops are its tiny, trembling heart-beat.”

The first song to become available is track one, “We No Who U R,” which will drop on Monday (Dec. 3). Full tracklist below the trailer with the saucy little album cover below it. Ellis and Cave could be heard earlier this year on the soundtrack to “Lawless.”