Well, the excellent new Nick Cave & the Bad Seeds LP is going down well… and we agree –  read the Gods and Alcoves review here. 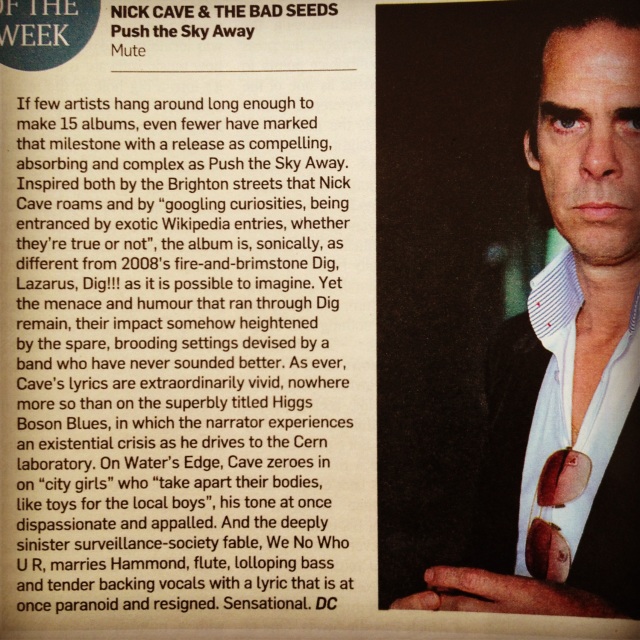 An LP as weighty, compelling and brilliant as The Bad Seeds have ever produced.

A couple of years after 2004’s double-album Abattoir Blues/The Lyre of Orpheus, Nick Cave and various Bad Seeds turned to a fledgling project they named Grinderman as a means of escaping the weight and expectation of their established act. Via some charged, deranged rock’n’roll, it accomplished exactly what its architects intended, enabling them to come on strong with 2008’s acclaimed Dig, Lazarus, Dig!!! and clear the palette for Push the Sky Away, their 15th studio album.

The product of a newly reconfigured Bad Seeds (their first album without founding member Mick Harvey, who left in 2009), Cave employs the metaphor of albums as children in its press release, likening it to “the ghost-baby in the incubator” wherein “Warren [Ellis]’s loops are its tiny, trembling heart-beat”. It is certainly a far stranger, subtler record than that last Bad Seeds outing. And in its own way this is every bit as fierce and uncompromising as both Grinderman LPs.

Lead single We No Who U R sets the template: a hymnal slow-burner replete with elemental imagery, it falls somewhere between simmering menace and odd, enchanting beauty. Over the following songs, Cave and his cohorts revel in this dichotomy.
Wide Lovely Eyes and We Real Cool are set against ominously rumbling guitar and bass respectively; strings, piano and backing vocals have to force their way upward in the mix to let in a little light, the ensuing interplay between tension and release exquisitely wrought.

“Wikipedia is heaven / When you don’t want to remember no more,” sighs Cave at one point, referencing the forays around arcane corners of the internet that influenced his songwriting.

These come to the fore in Higgs Boson Blues, a psychotropic eight-minute odyssey that finds him dwelling on everything from nightmarish depictions of Lucifer and disease-carrying missionaries to Miley Cyrus. The record closes with its title track, a call-to-arms both hushed and bracing in turn. “Some people say it’s just rock and roll / Oh, but it gets you right down to your soul / You’ve gotta keep on pushing,” Cave asserts.

It becomes increasingly evident the song is aimed at himself as much as anyone, on an LP as weighty, compelling and brilliant as The Bad Seeds have ever produced.

Cave’s adopted home of Brighton may or may not inform Wide Lovely Eyes’s bleak narrative of closed-down funfairs and mermaids hung by their hair. Grinderman and the Death of Bunny Munroe novel haven’t exhausted Cave’s store of ribald, black humour (“I was the match that would fire up her snatch,” he sings at one point) and Higgs Boson Blues finds equal evil in Lucifer and Miley Cyrus. But Cave is mostly in his familiar role as sombre, shadowy storyteller-observer. There aren’t the guitar storms of a Mercy Seat or Do You Love Me? but Jubilee Street – a beguiling tale of brothels and hypocrisy – could quietly become another Seeds classic.

Push the Sky Away is the 15th official album by Nick Cave and the Bad Seeds, but it could almost be their first. After 30 years together, the band has effectively come full circle, having completed its evolution from untamed beast to rock dignitary and, via the fearsome alter-ego offshoot Grinderman, back again. Factor in the recent resignation of Mick Harvey (Cave’s right hand man since their Boys Next Door days in the late 1970s), and the sudden deep-sixing of Grinderman (as a recording entity, at least), and the Bad Seeds’ reliably black essence now more closely resembles a blank canvas.

Push the Sky Away scans as the Bad Seeds’ post-Grinderman comedown album, to be filed alongside statelier turns like 1997’s The Boatman’s Call and 2001’s No More Shall We Part. But where the Bad Seeds’ mellow records usually find Cave in pensive, piano-man mode, Push the Sky Away presents an uncharacteristically weightless, eerily atmospheric sound; in lieu of crossover ballads like “Into My Arms” and “People Ain’t No Good”, we have foggy reveries built upon ominously rumbling bass lines, twitchy rhythmic tics, and hushed-voice intimations. It may not erupt with same force as the Bad Seeds’ stormiest gestures, but the underlying menace fuelling it remains.