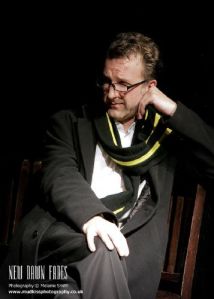 We’ve had the film, the books and the documentary…now get the play of the rise and fall of Joy Division, as Hooky and co get depicted on stage larger than life.

Of all the bands originating from the Greater Manchester area past and present, is there a more intriguingly, fascinating story than that of post punk gloom merchants Joy Division?

The tragic tale of their brief but brilliant chapter in rock’s history pages has already been covered in film and several books, the most recent being Peter Hook’s raw warts and all best seller Unknown Pleasures. Now we have for the first time, Joy Division the play in Brian Gorman’s A New Dawn Fades – premiered this week at The Lass O’Gowrie. I was not disappointed.

The play itself was performed upstairs in a room that appeared no bigger than the average master bedroom, with seats squashed up one end leaving little room for the performance. When I first entered the place my expectations dropped and thought to myself `This is going to be naff’ – the heat and the claustrophobia didn’t help – but as the action got going I was totally captivated.

For me, Lee Joseph – who played `Salford born larger than life’ Anthony H Wilson – stole the show, but by a whisker. Whereas Steve Coogan’s character in 24 Hour Party People captured the comedy value of Wilson’s persona perfectly, Joseph simply was Tony Wilson. No small feat as the character narrates the story for big chunks of the play in true over the top Wilson style.

So what is the story? Former Broughton High pupils Bernard Sumner (guitar), played by Sean Croke, and Peter Hook (bass), played by Guy Wills, are inspired to form a band after the infamous Sex Pistols gig at Manchester’s Lesser Free Trade Hall. Croke, to be fair, probably had the easier job playing a quiet and unanimated character, not having to stray outside the parameters. Hooky is depicted as a stereotypical chip-shouldered Salford angry head by the bearded Wills.

The group is completed by a civil servant living in Macclesfield who fancies himself as a singer songwriter by the name of Ian Curtis, played by Mike Whittaker, and fellow Macc lad Stephen Morris on drums, played by Andy Grogan.

Not taking anything away from Stephen Morris’s contribution to the band in real life, his drumming was essential to Joy Division’s sound, but his character was mainly confined to the background in this production. It was Whittaker’s performance as the tortured Curtis that made the play complete.

I find it hard again not to draw comparison to Michael Winterbottom’s 24 Hour Party People. Sean Harris, who played Curtis in the film came across as cold and withdrawn but retained subtle touches of self-assurance and cocksure self-belief. Whittaker however, portrays Curtis as a vulnerable and more human version. I would go as far as to say he appears needy and apologetic, as the carnage of his rock star existence becomes all too real. We get the jerky dance treatment as well as the lead up to the breakup of his marriage to shit-on wife Debbie, played perfectly by the waif like Natalie Marie-Perry.

New Dawn Fades is a proper everything goes tits up tale as the band, powered on by genius producer Martin Hannet and force of nature manager Rob Gretton, make commercial inroads, tv appearances, album releases, critical acclaim from Paul Morley and a planned tour of America. What could go wrong? Well try epilepsy, depression, too many gigs, riots at gigs, affairs with Belgian groupies – it’s all there leading up the tragic finale.

The play as a whole deserves a longer run, in a bigger venue.