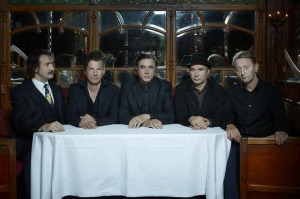 Traditionally, we have remembered the dead in silence. The centenary this year of the First World War, however, has prompted rather more monumental thinking. The 1914-18 conflict was a highly mechanised war, and its chemical weapons, tanks and explosives wreaked immeasurable catastrophe on the human beings fighting it. How to commemorate it? The United Kingdom’s prime minister David Cameron suggested events which spoke about what Britain is “as a nation”. The German chancellor Angela Merkel opened an exhibition in Berlin.

In the Flemish city of Diksmuide – site of a heroic tactical action in the war – a rather more impressive and far-reaching decision was made: the city commissioned original work from the German rock group Einstürzende Neubauten. Lament, a serious, 77-minute work, is everything one might hope for in a commemorative piece about the First World War. It is grave, often beautiful, and always thoughtful. It unearths hidden stories and its music enacts the savagery that ended so many lives. It doesn’t solely invoke tragedy – but also has humour and great ­humanity.

Fairly transparently, Neubauten are not your average guitar band. Formed in 1981 in West Berlin by the guitarist Blixa Bargeld, the group have historically been led more by ideas than melodies. Bargeld was for years a member of Nick Cave and the Bad Seeds, an engagement Cave once told me Bargeld spent “trying to make his guitar sound like a dying horse”. This isn’t an unfair distillation of his or Neubauten’s left-field, conceptual approach. The band have collaborated with dramatists, recorded under motorway bridges and embrace “inaudible” music.

They are perhaps most notorious, however, for a work called Concerto for Voice and Machinery which took place at the London ICA in 1984. Then, Bargeld periodically shouted through a loud hailer while the band, armed with appliances like a pneumatic drill, an angle grinder and various chainsaws, attacked a large concrete mass in the centre of the stage. Today, Bargeld is intransigent about interpretation of the event, and about power tools in general (“It was not a jackhammer,” he told one interviewer sternly). In 2006, he fronted a series of amusing commercials for the German DIY chain Hornbach, where he theatrically declaimed technical specifications of the tools in their catalogue.

Events like the ICA placed Neubauten at the forefront of “industrial” music – one of the noisier routes to freedom offered by post-punk. More significantly, it marked them out as a group whose work, though chaotic and destructive, was also conceptually sound, worthy of debate: pushing boundaries of what might be considered musical instruments, or music, and raising questions of mechanisation and humanity, structure and physical stability. Their name, translated, means “collapsing new buildings” – a reference to the life-threatening instability of some built environments in ­Germany after the Second World War.

On this new record, the band’s intellectual approach doesn’t just help them get closer to their subject – it helps them get inside it. For the project, the band employed two historical researchers to help uncover less-explored narratives from the conflict. Meanwhile, Neubauten’s Andrew Unruh has built “gigantic” instruments to use in the work, among them a barbed wire harp. The opening piece on the album is Kriegsmaschinerie (War Machinery), which puts it to good use: its clanking and metallic scraping instantly evoking a sense of mustering armaments in intense cold. It creates a sinister tension, as we wait for what is likely to be a terrifying peal of noise.

As loud as it can be, Lament’s most persuasive elements are the thoughtful, occasionally satirical ones, in which the band work with historical texts. Two (Hinterland and In the Trenches) feature words by a little-known modernist writer, Paul Van Der Broeck. Hymnen juxtaposes lyrics from the German and British national anthems to the tune of God Save the King – reminding us that the war was being fought by two monarchs who were related to each other. Sag Mir Wo Die Blumen Sind (Where Have All the Flowers Gone?) is a 50s song by folk singer Pete Seeger, here transplanted into a powerful new context. The Willy-Nicky Telegrams again juxtaposes texts – this time duplicitous telegrams between the cousins Kaiser Wilhelm and Czar Nicholas II of Russia. Strikingly, these are presented in an Auto-Tuned pop song reminiscent of will.i.am.

On Patrol in No Man’s Land and the closing All of No Man’s Land Is Ours both investigate the music of James Reese Europe, a jazz bandleader who fought in the African-American 369th Infantry – the so called “Harlem Hellfighters”. The first is filled with a wry and spirited fatalism (Neubauten’s cover sounds slightly boozy, and reminiscent of the Bad Seeds). The second is deeply poignant: the regiment’s contribution to the war was largely unrecognised. The songs work well on their own terms, but their effect is to make you turn to the internet and find the originals – a valuable act of discovery which draws attention to this less well-known story.

via Einsturzende Neubauten’s soulful of first World War | The National.