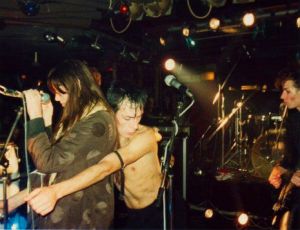 First I stumbled across these photos of the Velvet Underground’s junkie chanteuse doing a guest turn with Bauhaus and wouldn’t you know it, someone kindly posted the number, a cover of the VU’s “I’m Waiting for the Man,” on YouTube.

Ian Astbury: “Nico just ended up in Manchester on heroin. Southern Death Cult supported Bauhaus at Salford University when she did ‘Waiting for the Man’ with them, and Pete Murphy had to hold her up, she was so smacked out!”

Peter Murphy “Nico was gothic, but she was Mary Shelley gothic to everyone else’s Hammer horror film gothic. They both did Frankenstein, but Nico’s was real.”

Recorded at Fagin’s in Manchester on October 23, 1981 and later added as a CD bonus track to the Press the Eject and Give Me the Tape live Bauhaus album.

via True Goth: When Nico sang with Bauhaus, 1981 | Dangerous Minds.